2012 Corolla L - What did I miss when installing this door lock actuator?

#1
A couple of weeks ago, someone (home/work) tried to pry the little keyhole cover piece off on the outside driver door handle. So either shortly before or after that - it is unknown which and could have just been a coincidence that just started happening - the key FOB wasn't unlocking the doors properly. It started with the driver door, but then the passenger door in addition to the driver door got to where it wouldn't unlock. The key FOB was working fine. I put a new battery in it.

Because of the attempted break-in, an alarm was installed. They knew ahead of time when installing the alarm (which didn't require them to do anything with the lock/driver door anyway) that the driver door wasn't locking automatically via key FOB. They said the actuator was bad on the driver side and that they would fix it for $125, but they also noted that the actuator on the right side sounded weak, as well. It is possible that both sides may simply be going out around the time when someone happened to try a quick entry into the car.

Toyota wanted $225 for a single driver door actuator. Found an exact fit aftermarket model on Amazon for $35. I put it on the car yesterday. I tested to make sure the door closed properly since it is basically the entire piece that fits into the side of the door. I attached both cables going to the door latch inside of the car. I made sure that the vertical metal shaft went into the hole for the actuator. Everything seemed to fit fine. I tested the door lock switch inside of the car for unlocking the doors. All doors unlocked and locked fine via that switch. Last night when I was finished, it locked fine with the key FOB, as well. The alarm also set properly.

The next morning, none of the doors (including the back ones that had no issues) would unlock with the key FOB, but the alarm did disable when the FOB unlock button was pressed. A loud, continuous "beep" would sound from the driver side dash when attempting to lock the car via the key FOB. Only the driver door has a key hole to open manually. When the key was put in the keyhole and turned, the actuator made a noise as if turning/trying, but didn't unlock the door. I had to crawl through the back seat from the trunk and open the door from inside.

One detail that occurred to me after the fact was that I didn't check to see if this part was seated into the circular plastic area with teeth on it. No idea why I didn't check that. 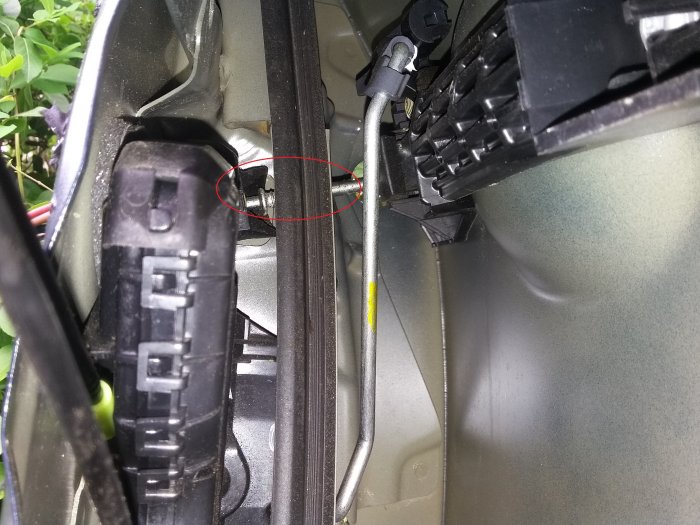 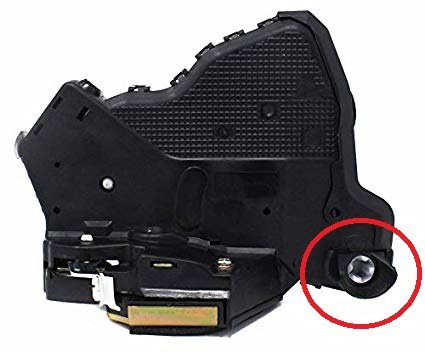 Could this part not being seated properly be the cause of all of this? I'm puzzled why it worked the day before and didn't the next morning. But also, like an idiot, I didn't try the manual key hole outside and a couple of other things to make sure it was all working. Obviously, it wasn't. I suspect the key hole isn't working and possibly even the key FOB isn't working because this part may not be lined up.
Last edited: Mar 23, 2019
J

Yeah, I put everything in right, but the issue was that the Phillips head screwdriver-shaped piece with the prongs (lock cylinder extension) was supposed to fit in said white area of the actuator. It was completely overshooting that and going completely over the top of the actuator and touching air. I lined that one up and everything works like it should now. I guess the car computer was throwing an error and making the sound/refusing to lock other locks because it thought that one was jammed. The alarm wasn't locking for the same reason. All of them work now. It was kind of tricky to get the top and bottom to line up, but it is in there. Thanks for the reply.

Tried the key in the door lock and it works like it should, the lock switch locks all locks now and everything seems like it was before the part went bad. I guess that not being connected properly can throw everything out of whack.

#3
Unfortunately I wasn't on here for the past few days but I'm glad that you resolved the issue. I would have also guessed that the system detected that something was blocking the lock from unlocking due to that long beeping noise that you mentioned.
C

#4
Thanks for sharing your issue. I'm about to tackle this job when I get time and this will definitely help.
J

#5
CorollaCommuter said:
Thanks for sharing your issue. I'm about to tackle this job when I get time and this will definitely help.
Click to expand...
Make sure the holes of the actuator are of course lined up for the screws on the side of the door. I forgot what the long arm is called, but that long silver arm that you'll see slides into the side of the actuator in a specific spot...that went in first and then I got the top part to slide into the part that I missed. It is impossible to put the top part in for the key cylinder first because then you can't slide that long arm into the actuator.

Also, there is a swing bar that is bolted onto the door. It is basically a support bar that also contains the rubber guide for the window. You have to unscrew one bolt to get that bar to swing around so that you can get the actuator in or out. It blocks it in. Just make sure that the rubber guide is where it was when you took it off. You'll see what I'm talking about.

#6
Awesome that you troubleshot your issue and resolved it Pat yourself on the back. I had done mine on a 2002 Crv and it was fun. I learned down the road when I did my regulator for the window using my gopro camera and smartphone. lol I was able to get a clearer shot of things. and able to skip steps to get the problem I had resolved.

again great write up and fix!

#7
It's possible that the key fob is malfunctioning or that the unlock button is broken. Try the lock, trunk release, or panic buttons. If all of the other buttons work, the issue is most likely a faulty unlock button. The power door locks may not unlock due to a malfunction in the wiring or control circuitry, or even a blown fuse. Try and see if you can do something by yourself, if not, I would recommend to ask for help from a locksmith service, I am sure that they will easily find the problem and fix it very fast.

#9
Renovation of interior doors in the apartment or house consists of several critical stages. The final result directly depends on the choice of the suitable model. Once you have chosen the suitable interior door models, considering such details as the design, dimensions, shape of the room, another critical stage follows: mounting. With the Locksmith in Grand prairie, I quickly installed all the doors in the house without much trouble, and now I enjoy them.

#10
That's a concerning problem, and you should immediately get it checked out.

#11
That's a concerning problem, and you should immediately get it checked out. I recently replaced my door lock actuator, but I didn't encounter this problem. The hardest part was getting the door back on, but it still wasn't very difficult. I also had a couple of little plastic clips pop off when I removed the door, so it took me a minute to figure out where they came from. If you don't usually do stuff like this, you'll need some Torx driver bits and some of those plastic trim tools that you can pick up from any auto parts store. Maybe it wasn't that bad for me because I took some courses from here https://www.howtobecomealocksmith.org/locksmith-salary/ but who knows.
You must log in or register to reply here.
Share: Facebook Twitter Google+ Reddit Pinterest Tumblr WhatsApp Email Link
Top