How I Reverse Engineered a Corolla

#1
I’d like to share some behind the scenes info on my current project: Reverse Engineering an entire car! That’s right, I’ve completely taken apart an entire car, grinding it open part by part, and made a full video series on it. Here’s the introduction video, from which you can find links to the playlist:


I have many more videos to come, but for now here is some background on why I undertook this marvel.


My curious mind always had me set on how things work in this world. As a child, I always had a passion for cars, which grew into me undertaking engineering studies to pursue it. To further fulfill my hands-on curiosity, I started buying bits and pieces of car parts from the junkyard, and taking them apart to learn how they work.

Cars are quite intricate and trekking to the junkyard for each component would prove unfeasible. I pondered upon the idea of buying a complete car and completely gutting it out. I wouldn’t have to worry that I’d mess something up, nor would I have to put it back together to drive to work the next day. This led to the purchase of a 2004 Honda Accord with 311,000km on it.

Long story short, the Accord proved a tough car that wasn’t yet ready to take on the teeth of my Sawzall. I ended up fixing it up and selling it, learning a few things about Honda’s along the way. The following year, I again was in quest of finding an old car to cut up.

My requirements were that it had to be easy to work on, simple in mechanics, driveable so I can move it around my driveway, and a popular car that would appeal to an audience of viewers. Having already had lots of experience with Camry platform vehicles, I chose a humble beige 2001 Toyota Corolla CE with only 204,000km. It was cheap, yet solid and mechanically fit as I drove it all 35km home on the highway. I promptly named it “Mr. Rolla”.


I started this project with three primary goals:

1. To learn how the internals of cars work, down to the small details

2. Document my work in a video portfolio

3. Share the knowledge I learn with others in the community online

Now my mechanical engineering education and career satisfies the theoretical side of me during the day. However my YouTube channel was built upon my hands-on skills, making clear, easy to understand how-to videos and I wanted to extend my experience in the same format to viewers.

My feeling before starting this project was there was not sufficient content out there explaining some very basic components in cars, and if there is, it isn’t very practical as everything is either theorized in an animation or presented with very poor production quality. For those of you who want to see what real car guts actually look like without looking at dark, shaky or grainy camera work or listening to an uneducated vlogger blabber on, then I created this series with you in mind. 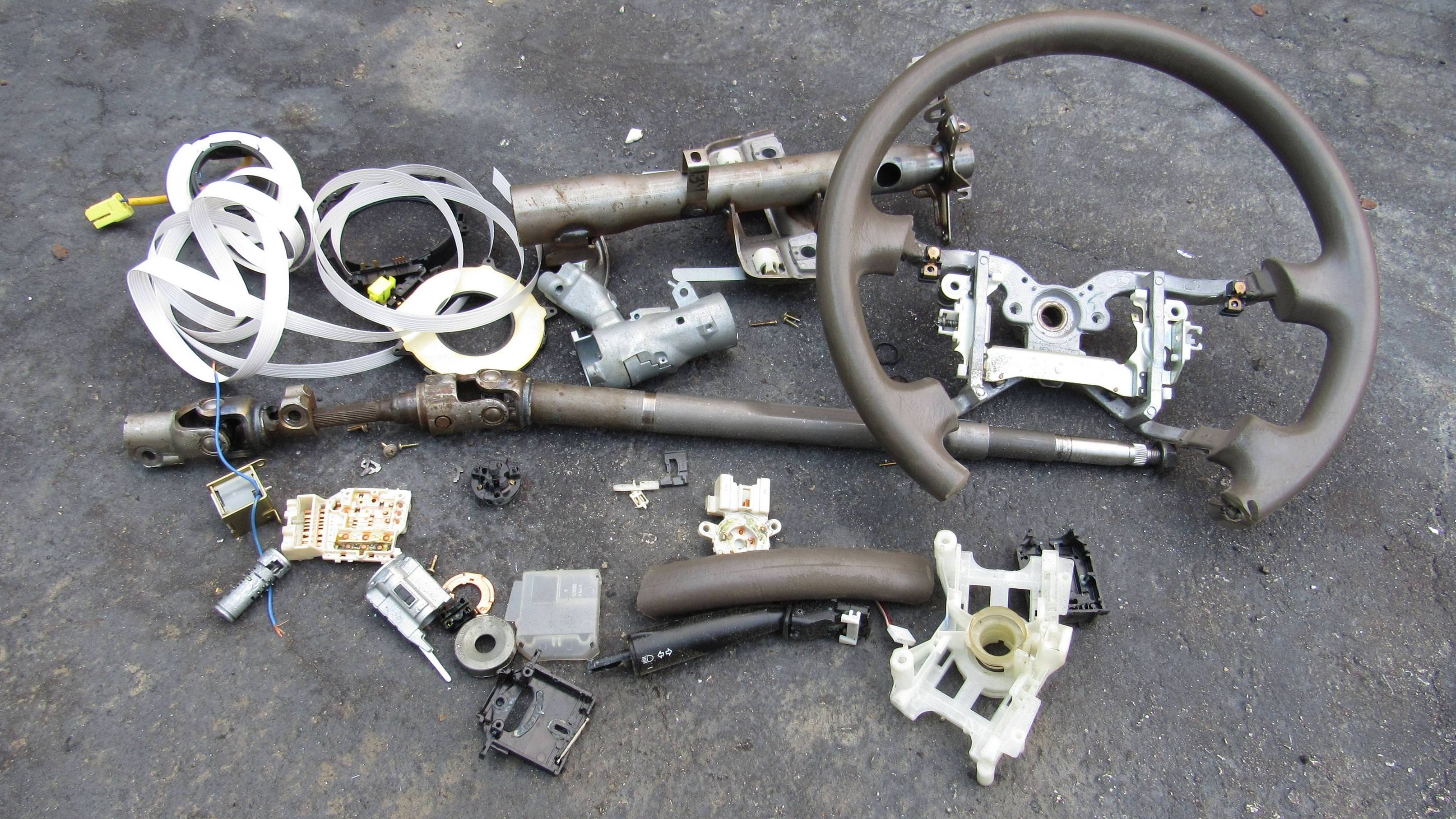 I began by listing all the major sub-components of a car, and started from the less destructive things like the muffler and HVAC system, eventually working my way to the engine. Logistically, tearing down a car isn’t an easy task, especially when you’re filming along the way. 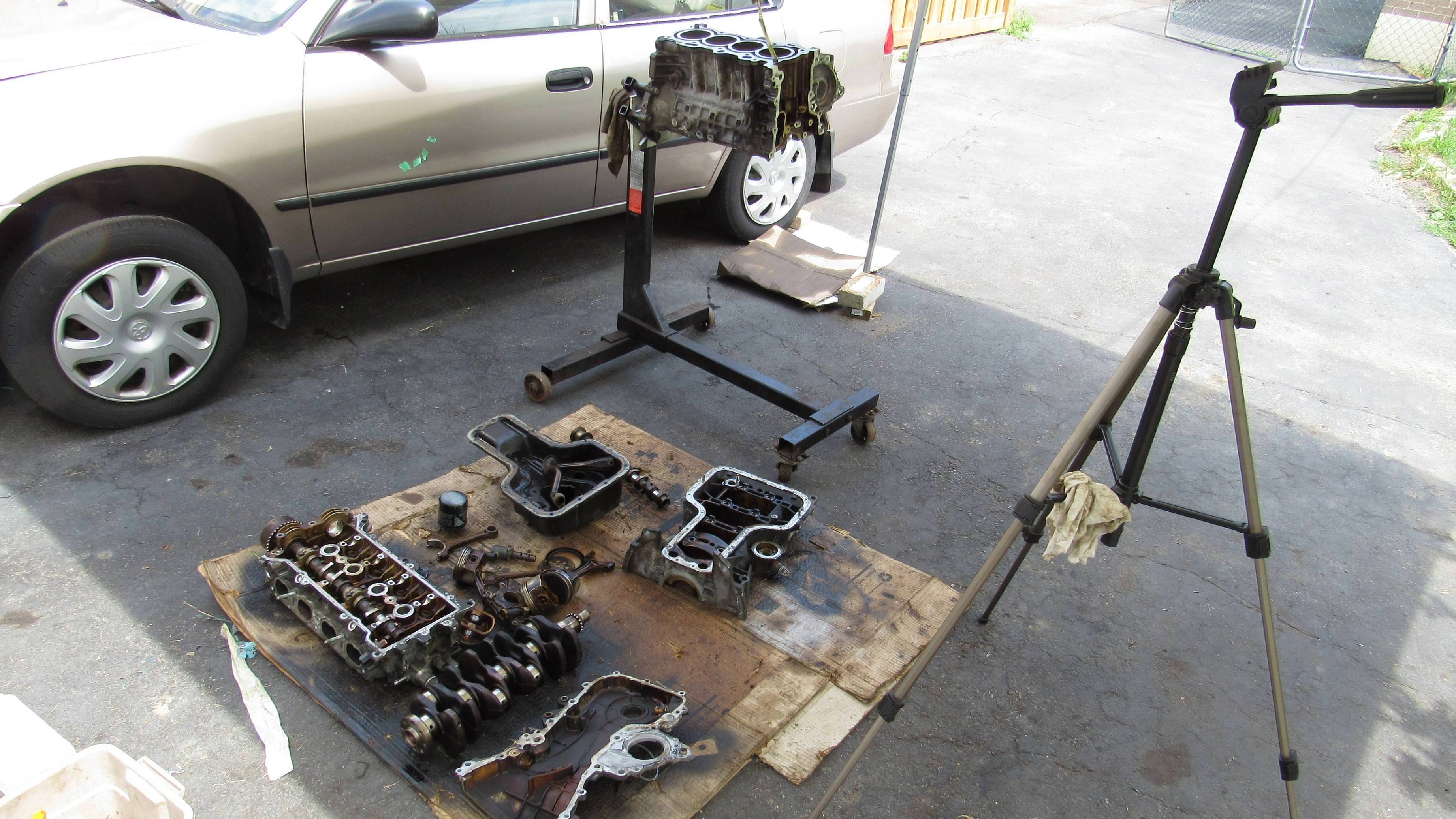 For complex things, I relied on the vehicle’s factory repair manual to guide me along the way. Engine removal was the first major task, which took me many days coming home after work and working on removing pieces around it bit by bit. I got my hands on an engine crane and hoisted the engine out. No one usually inquires when they see me working on my driveway, but an engine suspended on a crane above the car certainly caught the eye of both my neighbors. That was quite an accomplishment for me, since I’ve never removed an engine before. 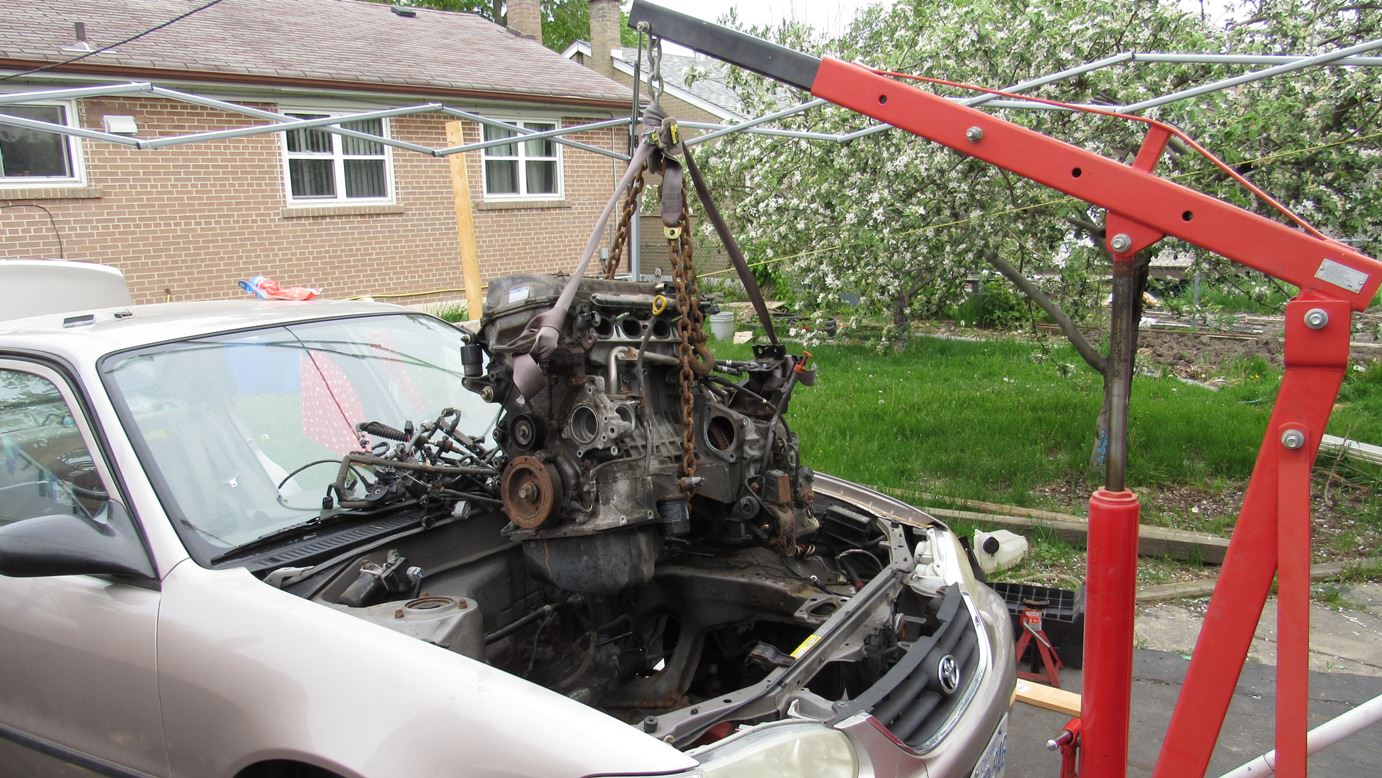 Disassembling the engine was very straight forward, as an inline 4 cylinder does not have too many complex components. I did however learn a lot about the engine’s oil lubrication system. I studied all the small little passages, and thought to myself how someone has to sit there and design the engine block, crank case and head to allow that oil to flow through to critical components. Then it has to sit on a mill and be machined out, feature by feature. That’s really something to think back upon! 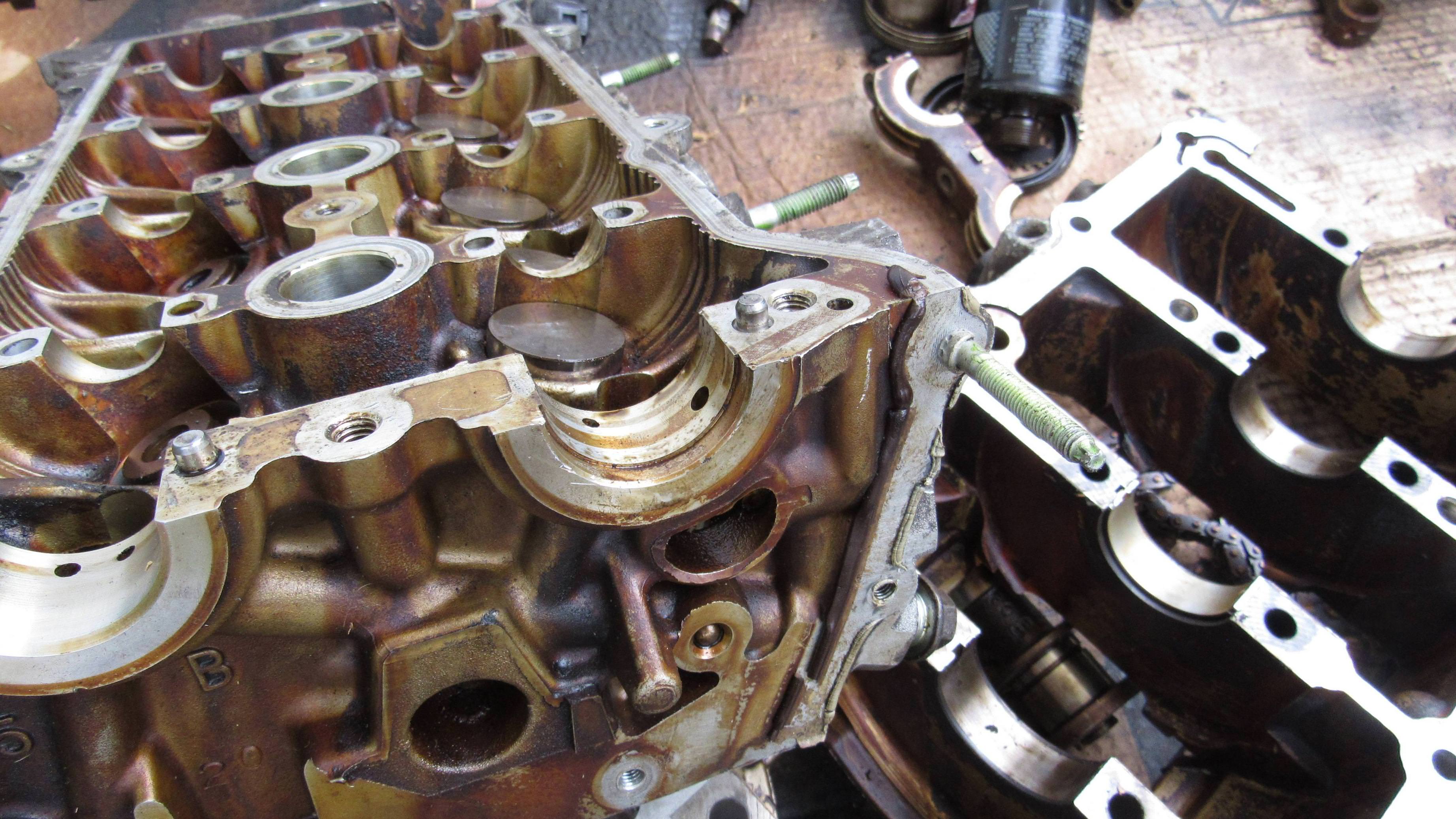 The transmission was another marvel. There are so many components inside the transmission, each having its own function, some of which I couldn’t even figure out. It is quite a marvel that two shafts, one input, and one counter shafts, with three planetary gear sets, a clutch, tranny pump, torque converter, valve body, pan and differential are all held in such a small compact space! Imagine how many iterations technology has had to develop the automatic transmission in order to refine it to such reliable operation that we take it for granted every day. 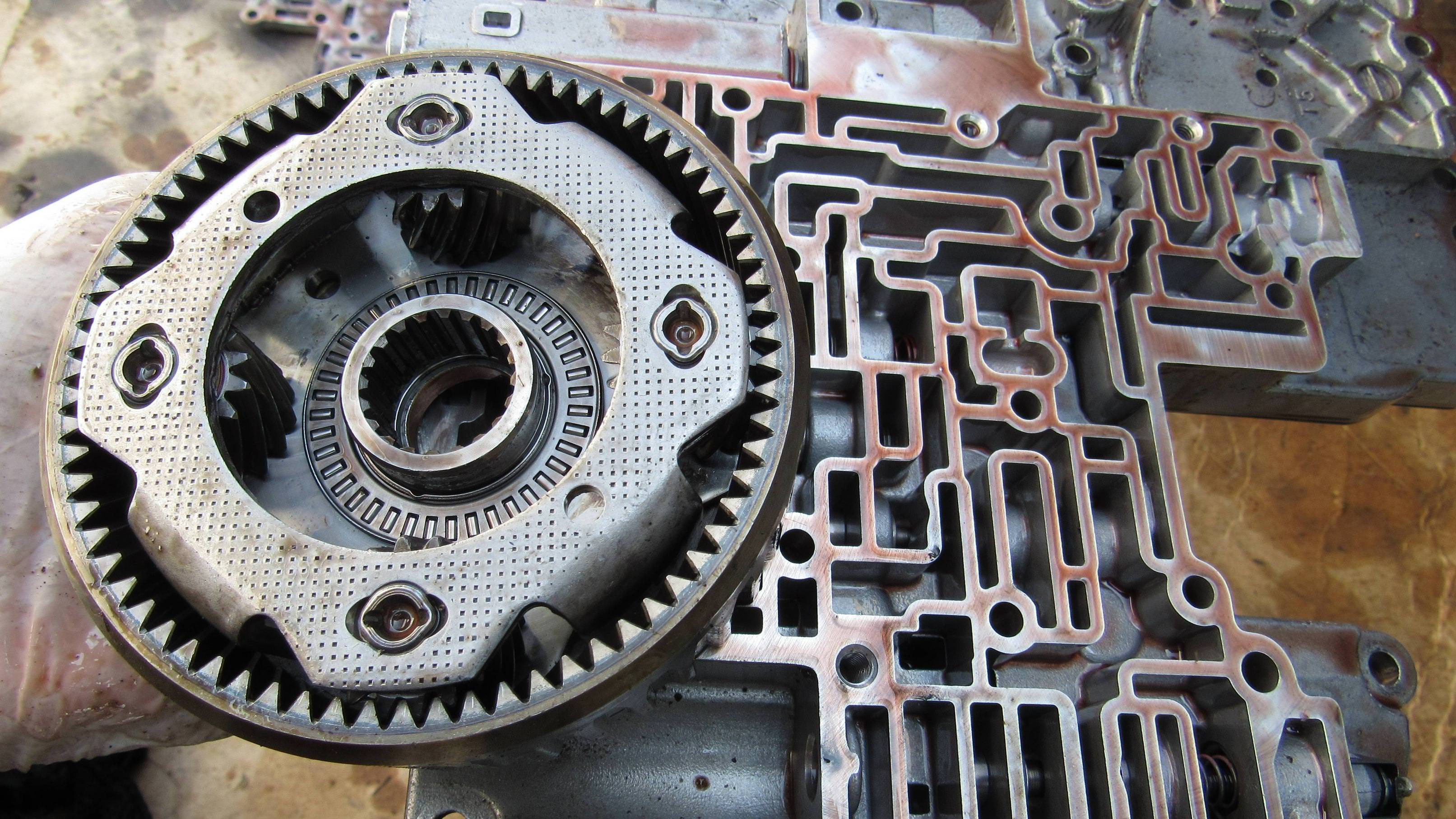 Of course there are smaller subsystems that we often don’t think about inside a car, nor can you find information as easily online. Some of those “dark areas” include the EVAP system – arguably one of the most mysterious because of where it’s situated underneath the car behind the gas tank. I bet a lot of people didn’t know it existed to fume gasoline vapors and how critical it is as a pollution control measure as well as a safety measure. Dropping and chopping the gas tank, EVAP charcoal canister and figuring out what all the valves and switches in that system work was quite intricate. There are so many valves and diaphragms in that system, no wonder it takes so much time to diagnose when you get that CEL!

A few other notable projects were the muffler, shifter assembly as well as the steering rack rotary valve. Even I had a hard time finding information on these online to gain some background knowledge before shooting my video.

Of course there were some videos I shot just for fun, because I have a scrap car at my disposal. The personality of the Toyota Corolla is that it’s a boring and slow car to drive. Well I decided to change that mentality by chopping the top off! That was good fun, and I bet it’s the first Corolla convertible in recent times out there.

I also had to do something interesting with the airbags. Instead of blowing them up in smoke and watching them fly high, I pondered if the force of an airbag can actually lift up a car. So instead, I deployed the airbags underneath the car – with no engine to make it even lighter. Sadly though I was a bit disappointed that the car didn’t really lift up off its wheels, though it did leave a huge dent in the floor pan. My neighbors were once again startled by the explosion and came over to make sure I was okay. 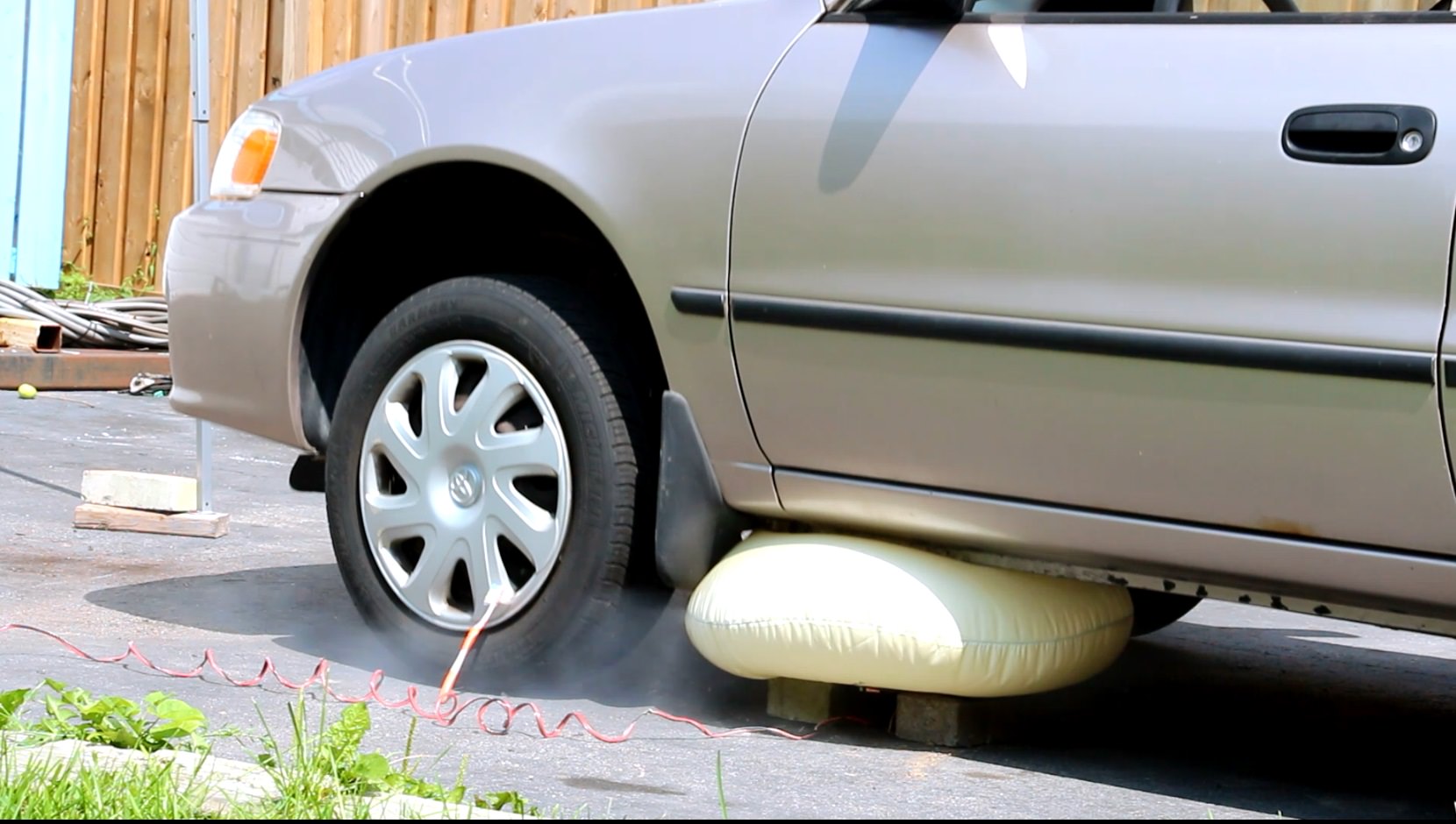 I learned so much doing this project, and I still have more videos to produce. I’m very excited and motivated to finish this car off so I can move back on to doing some repair, hacking and upgrading videos again. Little did I know I would have so much fun with the most boringest of cars… a Toyota Corolla!

While taking this car apart, I not only learned how each subcomponent worked. I learned how individual components are put together, how they are manufactured, what materials they are made of, their design relative to other components, as well as the order that these pieces are installed when making a car. 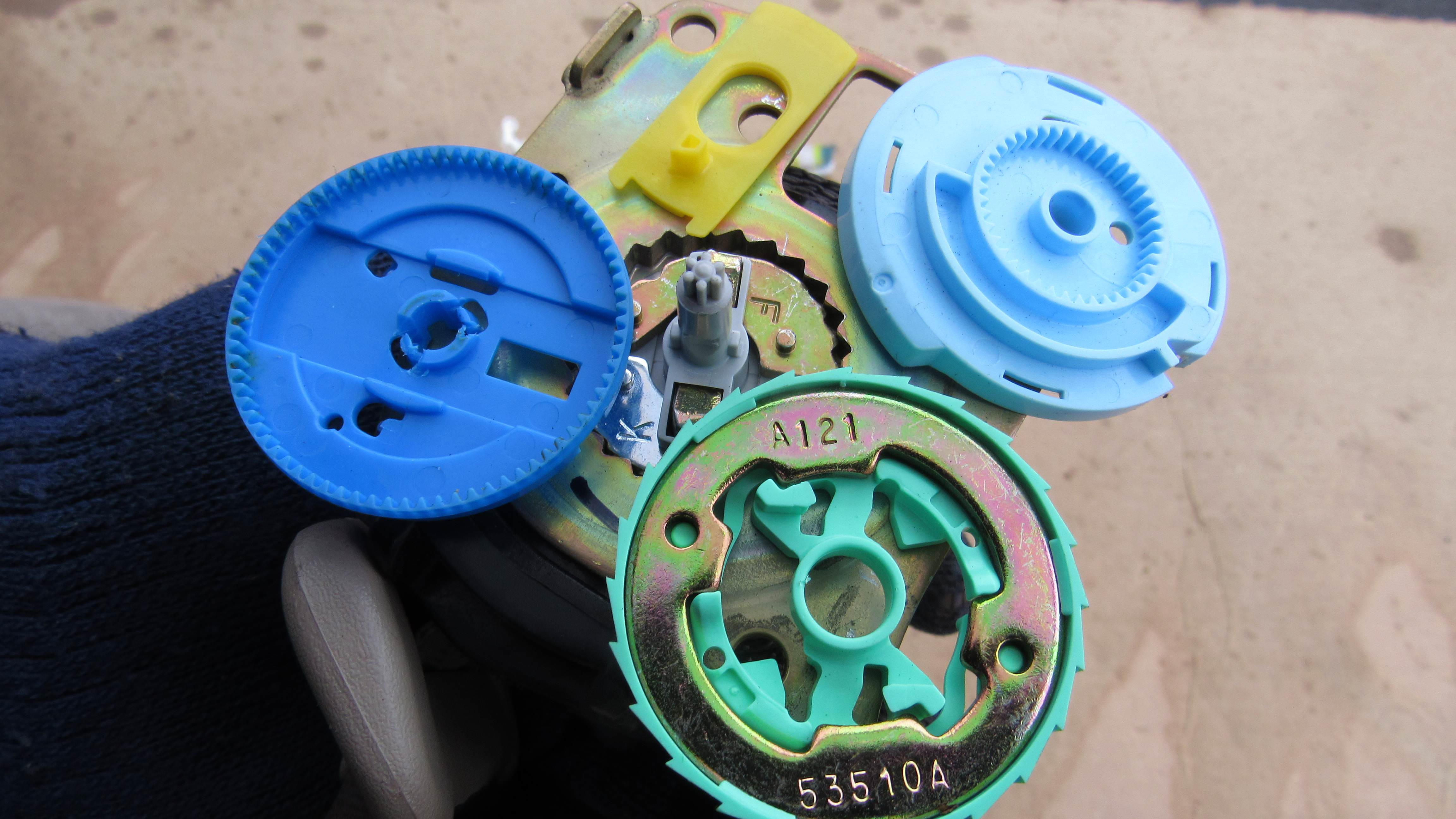 There is quite a lot that goes into a car than you would even see on the final assembly line. You can definitely see why cars are designed with 5+ year lifecycles, because so much engineering, testing and manufacturing preparations have to be made! 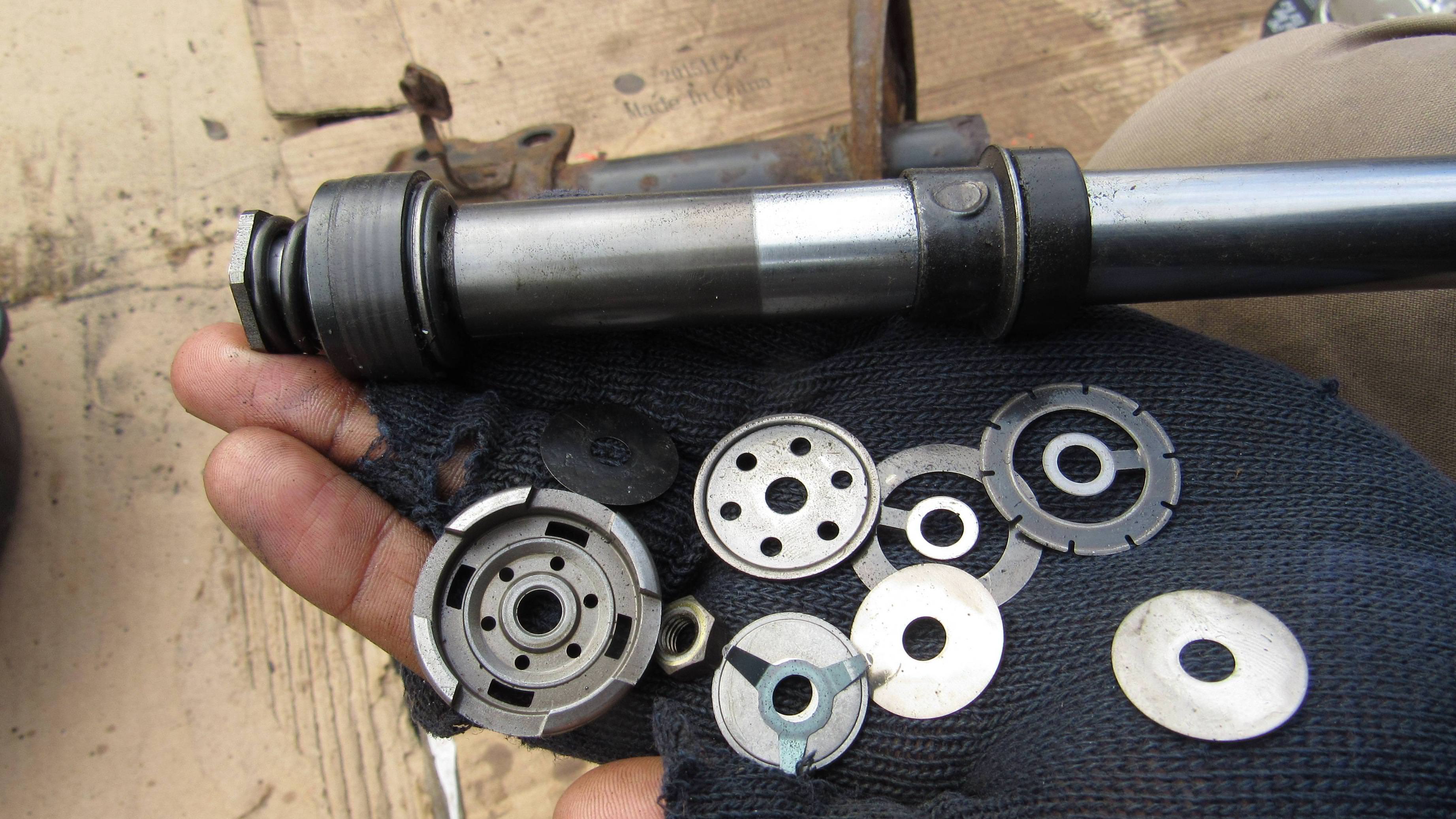 You may ask – would I ever do this again? Of course! If time and space allows, I’d look forward to reverse engineering something different and more complex, having already mastered the basics. I’m thinking a luxury car, with a V6 or V8 engine and RWD configuration, and lots of electronic gizmos and gadgets to dissect.

I hope you all enjoy my video series. I’m always open to constructive feedback, video suggestions and ways to improve. Make sure you stay tuned if you want to see more videos just like this!

#2
Great project, very interesting! I learned a lot, thank you!
And kudos to the true, unsung hero of this project, your brother, who graciously let you use his underwear and toothbrush!
C

#3
Great series of videos you produced on Youtube "Corolla reverse engineered". I watched all 45 videos in two days. The content is excellent and knowing almost no part would be overlooked kept me ready to see the next video. Another grinding wheel, there's more to see inside of this.

Made me think of the company "Munro Associates" who tears apart cars to see how they are made, cost of materials, manufacturing, etc who then sell it to competitors or subsystem manufacturers like TRW.

Watch his video series and then pay the 2 to 5 dollar entry fee for a you pull it junkyard to look through the marvels of engineering. Bring tools, extra water, gloves, and most of all be respectful of their inventory. Unscrew it, unbolt it, unplug it. Don't rip/break/snap/cut unless you own it. I understand the junkyard curiosity for sure. In 4 hours removed nearly everything in the front seat area. setting them across the back seat and rear deck lid for those who needed those parts. Best two bucks ever spent. The GEICO insurance sticker in upper right shows it was "run and drive"ing but side swipe scrapes were too much to repair so it was driven to the junkyard. 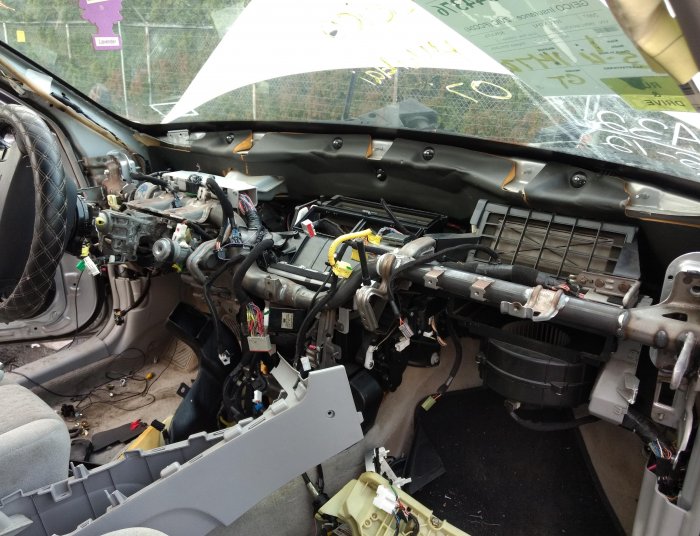 #4
You know, since childhood, I was passionate about this field, but I never had the power to start learning it. For years, engineers have been a crucial part of society. Regardless of whether it’s dedicated to space travel, defense, infrastructure maintenance, or environmental protection, engineers are the ones who keep our society running smoothly. I usually follow the work from https://www.sandfieldengineering.com/automation-products/bowl-feeders/ because they are a great example of competent, intelligent, and professional engineers in the country.
You must log in or register to reply here.
Share: Facebook Twitter Google+ Reddit Pinterest Tumblr WhatsApp Email Link
Top