#1
Hey everyone, My wife had mentioned that the low beam and front turn signal light bulbs in our 2010 Corolla were looking a bit dim.

I'm pretty sure that they are the original "OEM" bulbs so I did some research and I didn't realize that halogen bulbs can get a bit dimmer as they age. I knew that standard incandescent bulbs like the front turn signal would get dimmer over time but I was surprised that the halogen bulbs have the same issue.

We bought this 2010 model year car from Hertz back in 2012. I figured almost ten years was good enough for the OEM bulbs.

The LASFIT brand had good reviews on Amazon so I got the 9006 and 3357A (amber) equivalent light bulbs.

I first installed the front turn signal bulbs and WOW they are super bright. It doesn't show up very well in the pictures but I was super impressed.

Then I installed the low beam bulbs. The instructions say to adjust the LEDs so that they are pointing out to the outside edges of the car (rather than up and down). So I rotated them to be at 6PM and 3PM on a clock.

With the engine off, you can hear the small fan kick on to cool off the bulb. Once again I was super impressed by the amount of light produced by the bulbs. It made our old Corolla almost look like one of those brand new BMWs or Mercedes Benz cars with the crazy bright LED headlights. The color temperature was a nice bright daylight that looked high end.

I'm hoping that since LEDs are supposed to last something like 20,000 to 50,000 hours, I won't ever have to change them again or worry about them getting dim over time.

Here are the pictures - 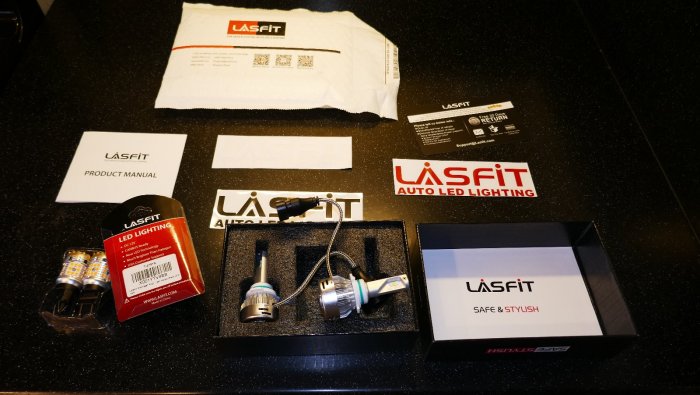 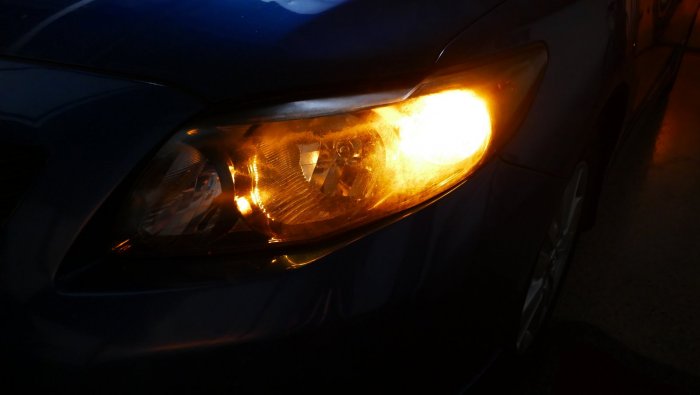 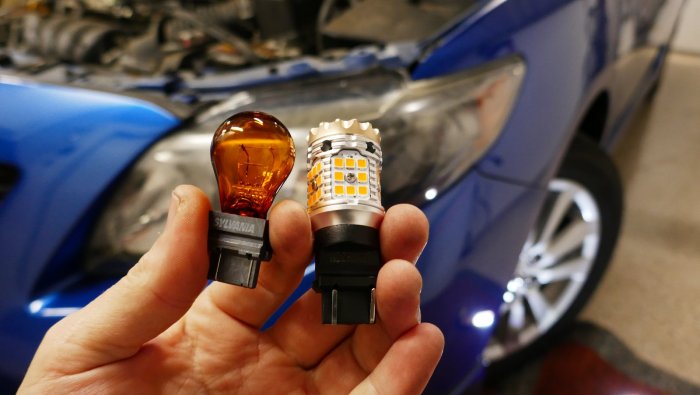 After Picture - It's hard to tell here in the photo, but it was amazingly bright. 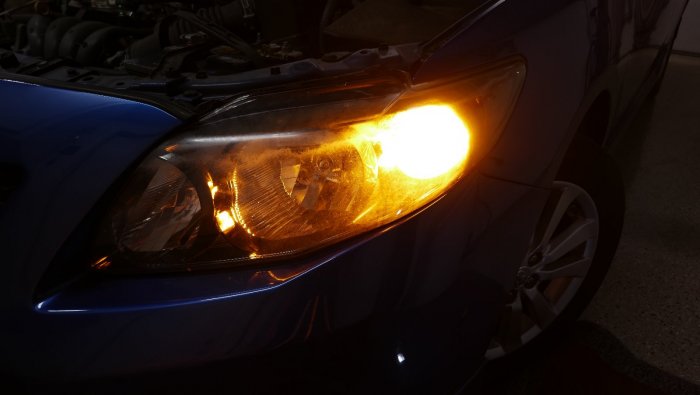 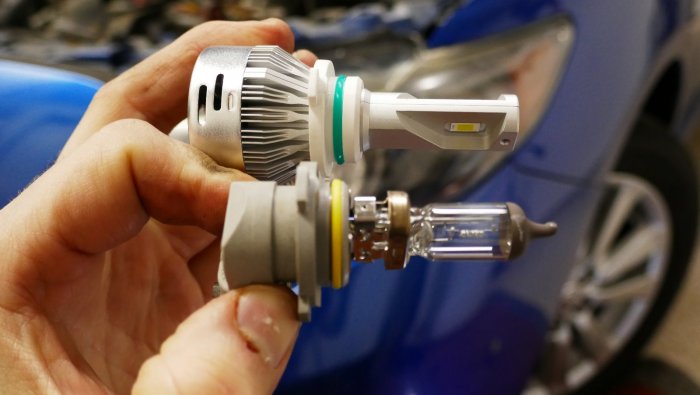 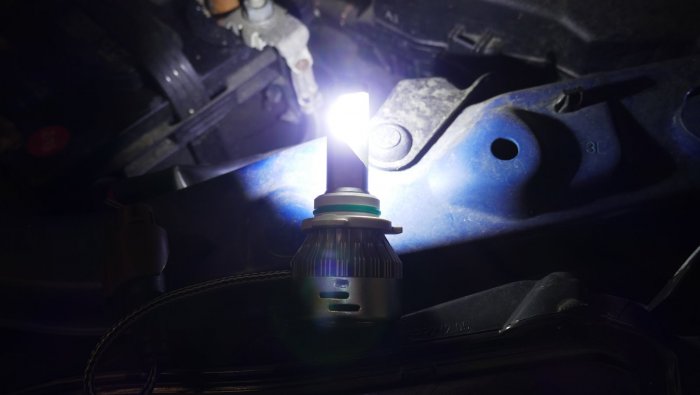 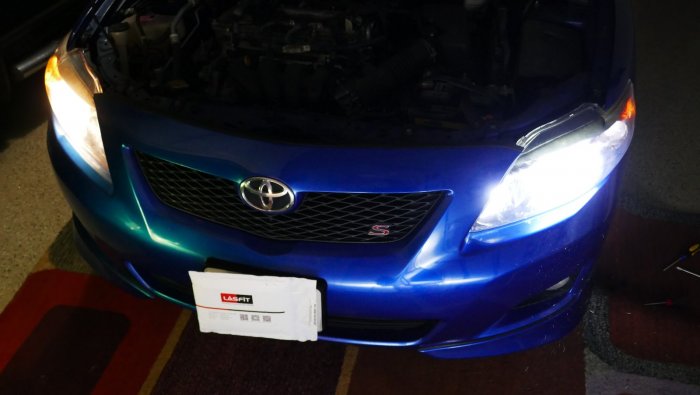 #2
Hi. Just some questions. You didn’t had to worry about hyper flashing with your signal lights? How does the LED headlights illuminate the road at night time? You know, in comparison with the old halogen lights.

#3
Toyota for life said:
Hi. Just some questions. You didn’t had to worry about hyper flashing with your signal lights? How does the LED headlights illuminate the road at night time? You know, in comparison with the old halogen lights.
Click to expand...
Hi, apparently the bulbs are engineered to not hyper flash. I think it said "no hyper flashing" on the product details page. The front turn signals work perfectly. I do lose the "parking" dim light feature of the old incandescent dual filament bulbs but the regular front side marker bulb also acts as a "parking" light so I'm not too worried about it.

The LED headlights are definitely a lot brighter than our old original halogen bulbs. My wife loves how she can see better at night. The beam seems to be the same to me. I still need to polish out the haze on the headlights. That should also help.

Whatever bulbs you buy, be sure to read the instructions. My Lasfit headlight bulbs had to have the LEDs pointed to the 3pm and 6pm position.

I'm not going to bother upgrading the high beams. They hardly ever get used except for the occasional flashing of another car to let them go first at a four way stop sign.

Wow, they are crazy bright!

My wife loves how the reverse lights really get noticed when backing up in a crowded parking garage with maniacs zipping around the corners.

#5
I really appreciate the information. Being curious for years and never done it because didn’t wanted to test products. I’m assuming the headlight positioning is so the light beam points where it’s needed.

#6
Toyota for life said:
I really appreciate the information. Being curious for years and never done it because didn’t wanted to test products. I’m assuming the headlight positioning is so the light beam points where it’s needed.
Click to expand...
Hi, yes, the instruction manual said that the two LEDs on the sides needed to be pointed to the left and right rather than up and down to achieve the correct "beam spread".

I'll update this thread if we ever have any problems with the bulbs.
H

#7
Thanks for the info Paul. Which ones did you use, 72w a pair or the 60w a pair? The OEM ones on my daughters '13 definitely suck. I don't any reason to go with the 72w a pair, I believe low and high beam circuits are rated at 55w each, somebody please correct if wrong.
You must log in or register to reply here.
Share: Facebook Twitter Google+ Reddit Pinterest Tumblr WhatsApp Email Link
Top